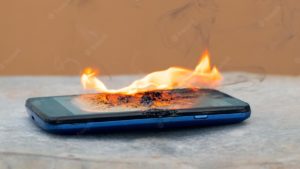 In August 2021, an iPhone XR caught fire on a plane mid-flight after a passenger dropped it on the side of their seat (Corfield, 2021). In 2016, a teenager panicked, thinking that the plane she was on to get to Hawaii was going down after her iPhone 6 burst into flames (Boulton, 2016). These are two instances where phones have been known to combust into flames during flights. However, there are also events in which phones might overheat and explode (see Cohen, 2021). While the chances of your phone catching on fire is quite slim because modern phones usually have safety precautions nowadays, it might still happen to you.

In this article, we’ll look at the five most common reasons for cellphone fires and how you can prevent them.

Fake, cheap, or counterfeit phone chargers are the primary culprit for exploding phones (Gadgets Now Bureau, 2021). These inauthentic chargers may display a specific amperage on the box, in an attempt to mimic the original genuine product, but in reality, the actual output is a different amperage. Another problem with counterfeit chargers is that they are not made to industry standards, they usually have the metal pins exposed, there might be some live parts, and the insulations are usually just basic. 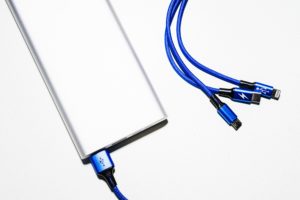 2. Using a phone that is heavily damaged

Phones that are heavily damaged can function fine for weeks or months after the initial damage, but internally, there might be some damage to the internal system already. In fact, the main reason why phones explode is when the lithium battery of a phone is exposed to the air.

3. Using your phone while it’s charging This will likely speed up the damage to your battery, which will make it explode or catch on fire more easily. In order to avoid this, it is best that you avoid using your phone while it’s charging.

4. Getting your phone repaired from unauthorized services

It isn’t always a good idea to have your phone repaired by phone technicians or repairmen that aren’t credited by the company that produced your phone. Oftentimes, these technicians have no training or knowledge in terms of the make and production of your phone and might damage it during the repair.

Whenever you need to get your phone fixed, it is best to go to the authorized repairing services such as the Apple repair center.

Another common reason which might lead to phones exploding is when there is a manufacturing defect. This is especially the case for the lithium-ion battery. When the battery wasn’t tested properly or when it is placed unsecured in the phone, it might lead to the battery exploding in on itself.

In these cases, phones usually offer a refund or guarantees that cover any manufacturing defect. Cohen, J. (2021, August 31). Exploding Phones: Why It Happens, How to Prevent It. PCMAG. https://www.pcmag.com/how-to/why-phones-explode-and-how-to-prevent-it-from-happening-to-you

Thanks for subscribing!
Wait! Don't Miss the Discount